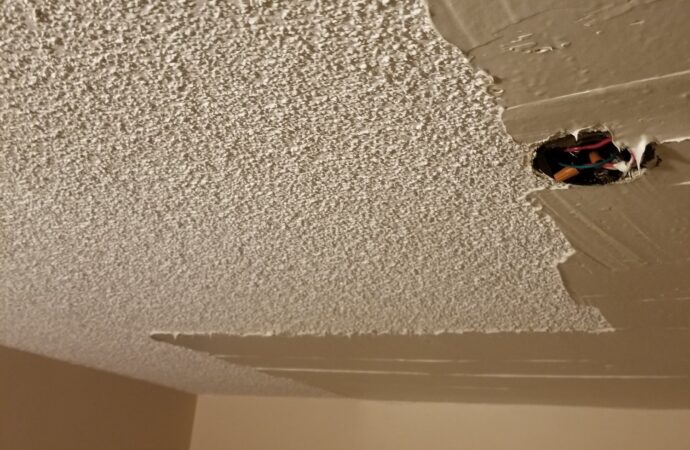 Why was Popcorn Ceiling Popular?

Known by many names such as stipple ceiling, stucco, or acoustic ceiling, popcorn ceiling is the type that can be done using two treatments: spray-on or paint-on. Popcorn ceiling gets its name from its texture created using styrofoam or stucco, giving the painting style its familiar bumpy surface resembling popcorn. And therefore, the name popcorn ceiling.

Now to answer the question: When was popcorn ceiling popular? Popcorn ceilings were trendy from 1945 to the early 1990s. Their popularity was because builders used them in house constructions as they were cost-efficient and time-saving.

Another reason for their popularity was their ability to hide imperfections easily, and they were especially an excellent choice for reducing ambient echoes and noise. There was a time when popcorn ceilings were visible in almost every house of the United States in the 1970s. But their popularity soon began to diminish.

Around the mid-2000s, popcorn ceilings came under tremendous scrutiny across North America for a component used to make paint called White asbestos, which is commonly acknowledged as a cancer-causing toxin. This led multitudes of homeowners to question; Are popcorn ceilings toxic?

In the pre-1970s, paint companies used asbestos in making paints. This component was identified as hazardous to the environment.

The fibers in the asbestos mineral are categorized as dangerous and can prove to be extremely harmful if inhaled. They may even lead to serious health risks, which motivated governmental agencies like the Clean Air Act in the United States to ban it in ceiling treatments.

According to Insider.com- “Throughout the 1970s, the Environmental Protection Agency began heavily regulating asbestos in different use cases in materials. Eventually, that led to a ban on asbestos-containing spray-applied surfacing materials, aka sprayed-on popcorn ceilings.” As a result, by the early 1980s, the United States decided to ban asbestos-containing products.

As soon as its adverse impacts on health were recognized, America experienced a trend towards more modern clean-lined design features. The century began contemplating the pros and cons of popcorn ceilings soon.

Let us see how considering popcorn ceiling pros and cons may help you in your next project:

Popcorn ceilings were an attractive option for a ceiling covering, but modern-day interior designers are experimenting with newer designs today. And the popcorn ceiling is certainly not amongst those recent trends. Other than that, it is a brilliant idea to weigh the disadvantages that have led to the idea’s unpopularity so quickly.

Popcorn ceilings may be beneficial in hiding imperfections, deaden noises, and are less costly, but it is difficult to repair them, hard to clean, and honestly outdated. We highly doubt you would not end up with a few scratches on your body while attempting to remove the popcorn ceilings.